Reflecting back on the years of my life is so wild to think about, especially the most recent years, and not in the way that most 22 year olds would describe. I never pictured myself as a wife and especially a mom at this young of an age, but now that I am here I can’t picture my life without Matt and Roen. The 2 of them really do make me a better person, and for that I am so grateful! I didn’t go to Vegas for my 21st, or even downtown, but I don’t feel like I missed out on those things. I enjoyed being able to order a drink at dinner with Matt and occasionally go out for karaoke and a couple beers, but 21 is so different when you have the responsibilities that motherhood and marriage brings. Like any year, there were good times and there were bad times. I made mistakes and I learned new things. I grew as a mother, a wife, a sister, a daughter, a Christian, and a lover of natural things! But let’s get real, I’m only turning 22 and I still have so much to learn and experience.

Life became difficult for me after 2 bad relationships where I lost my self-respect. In the middle of trying to get it back, I lost my dad. I went threw a rebellious stage to numb the pain, then a year later I went through the grief stage. Here’s a tip, if you can avoid trying to suppress the pain and just get through it, then you’re one step closer to finding peace with the loss. Right when life seemed simple enough and the most stressful thing was choosing which college to transfer too, I fell madly in love with my new boyfriend after just two months of knowing each other. I remember telling my sister and best friend that I loved him before they had even met him, and they thought it was silly of me to feel so strongly so soon. But I did, and now we’re about to celebrate two years of marriage!  When we found out we were expecting, we were both super excited to start our future together. The first morning after bringing Roen home from the hospital was the scariest thing ever. Matt was at work, there were no nurses or doctors to help, and I was responsible for this tiny fragile human being. My pregnancy hormones became post-baby hormones and I cried over every little thing and stressed over scheduling feedings, trying to get him on a sleeping schedule, and trying to figure out which cry meant what. I submerged myself in every book and app I could on parenting. I tried so hard to take the advice of those books and apps but it was stressful, and didn’t feel right. When Roen was maybe 2 weeks old, I set down the books, deleted the apps, and just let my motherly instincts kick in. That’s when motherhood felt natural. However, getting through colic at 3am in the hot month of August in a condo with no AC was hard. Arguing with Matt over whose turn it was to change the poopy diaper was hard. Not being able to have me time because I couldn’t be gone long since Roen wouldn’t take a bottle was hard. Navigating the first year of marriage while becoming new parents was hard. Motherhood is hard. Being a patient and kind wife all the time is hard. And yet, here I am, finishing college, working part time, taking care of the house, my son, my husband, and the dog and life is pretty darn good despite all the hard things.

The more I read the words above, the sillier they seem. There are so many wonderful things in my life to celebrate, so many things that outweigh the hard times. I am so fortunate to have the life I live, and at 22, there is so much more to experience. Bring on the good and the bad!

Roen and I met Terra for lunch followed by saying hi to some cuties at the animal shelter! Now just waiting for Roen to wake up from a late nap and daddy and I are off for a date night! 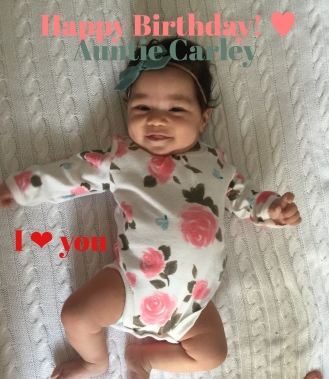 “But Jesus looked at them and said to them, ‘With men this is impossible, but with God all things are possible.’”